Retail giant Amazon recently found itself at the center of controversy in India, after it was reported that it is selling virginity pills that help women fake their virginity on wedding night.

Called “i-virgin”, the controversial product consists of small capsules containing a mysterious “blood-powder” that allegedly imitates human blood. All the user has to do is insert one of these pills in the vagina a couple of hours before the planned intercourse to fake virginity. The producer adds that the “high quality blood” completely dissolves, posing no health danger to the user. Amazon India has been accused that by selling a product which helps fake virginity on the first day of marriage it is supporting a centuries-old taboo.

In certain regions of India, the need to pass virginity checks is considered a life-or-death situation, with relatives of the groom inspecting the bed sheets after the newlyweds’ wedding night. If the bride fails the test her family must pay compensation, or in extreme cases endure a series of trials, like walking on hot embers or staying underwater for a period of time without coming up for air. Many have expressed concern that in a country where a woman’s virginity often determines her worth, a product like i-virgin just encourages centuries-old taboos. 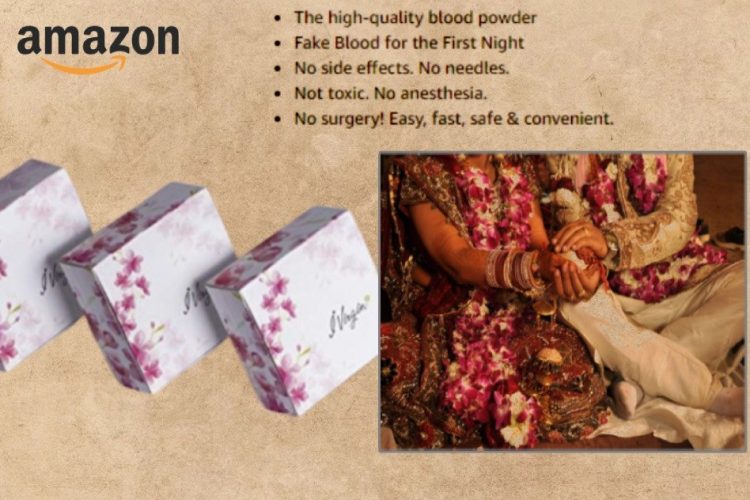 It is worth pointing out that Amazon has been selling similar products on its European store for years, with German company VirginiaCare, even selling artificial hymens containing bovine blood. Similar virginity-faking capsules are also available on Chinese mega store Alibaba.

i-virgin capsules were reportedly being sold in India for 3,600 rupees ($50) per pack, but at the time of this writing, the controversial product seems to have been removed from the store.