“Work is to be done on an accelerated basis with multiple contractors to ensure quick completion,” a statement from the inter-ministerial Committee on Roads and Highways, Transport and Interior stated.

The statement added that “this is in accordance with already commenced processes prior to the unfortunate incident that occurred on Thursday.”
A student of the West African Senior High School at Adenta is feared dead after she became the latest to be hit by a car on the highway on Thursday afternoon.

Like a number of the fatalities, she was trying to cross the highway.

In the meantime, the statement said “the MTTD [Motor Traffic and Transport Department] of the Ghana Police Service has deployed men on the stretch to enforce the relevant road traffic regulations on speeding limits.”

“Traffic signal lights and street lighting are also to be fixed to improve visibility on the corridor,” it added.

The police have however been condemned for manhandling some of the protesters.

Residents have intensified protests over the lack of footbridges on the road in recent times following multiple deaths in the past week.

After the Thursday accident, residents blocked the road and set fire to tyres. 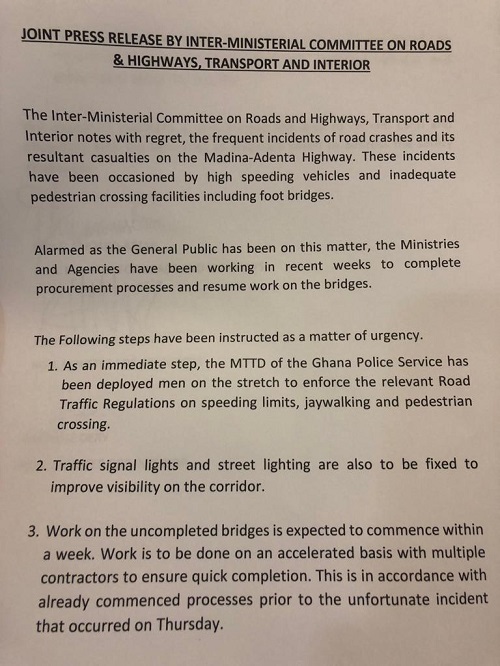 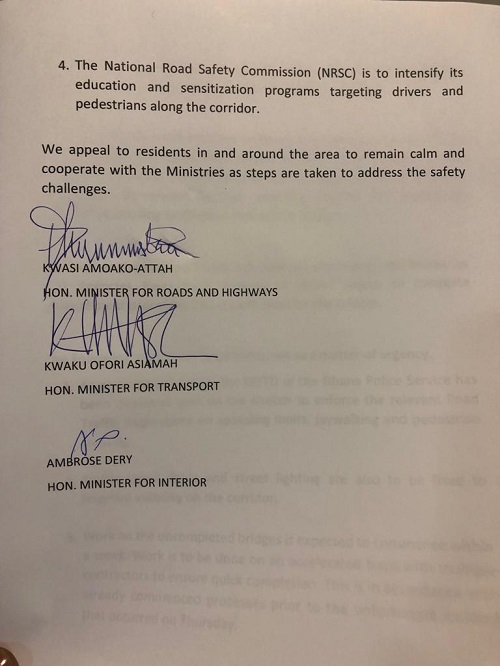 There was a similar protest last Friday by some residents of Adenta Barrier after a resident was killed in a hit-and-run.

A middle-aged woman was also hit by a truck at Fire Stone earlier this week.

In response to this, the MTTD instructed the Greater Accra regional MTTD command to deploy more men to the Adenta-Madina-Aburi road to check over speeding and other road offenses.

It was initially thought the contractor on the road would return to work after three months.

The MP for the area, Alhaji Boniface Saddiq Abubakar, had said the Ministry of Roads and Highways was in talks with the contractor of the Madina-Adenta highway to return to the site and complete construction of the footbridges.

According to him, the contractor will return to the site following the payment of arrears owed him.

“Apparently the contract was not cancelled. But unfortunately, NDC was not dealing with the contractor because they were not making payments to the contractor and so he had to withdraw his services,” the minister said.

“I was with the Minister for Roads and Highways who gave me the assurance that between three to four months, contractors will be on site. So I’m taking that assurance because what is left is the ladder that one will climb. This is because the major work has been done.”