Iranians frustrated with their country’s regime are calling for Iran to be banned from participating in world sport.

The hashtag #BanIRSportsFederations has been used more than 60,000 times on Twitter in just 24 hours to call for a ban as a result of “state interference in sports”.

It follows two high-profile events – one in domestic football, the other in international judo – which social media users say highlight the sharp disparity between the Iranian regime and its people.

Some have rallied around a 29-year-old woman who set herself on fire outside a court in Tehran in protest at a prison sentence she had received for trying to enter a football stadium disguised as a man.

Iran’s government has not yet guaranteed that women can attend official football matches, despite being set a deadline of 31 August by Fifa to “pave the way” for female attendees.

Masoud Shojaei, the captain of the Iran men’s football team, condemned the prison sentence in a Persian-language post on an Instagram story.

“Without a doubt the self-immolation of a girl today after the extension of her custody on the charge of trying to enter a stadium to watch football is rooted in outdated and cringe-worthy thoughts that will not be understood by future generations,” he wrote.

Many on social media have called for Fifa to punish the Iranian football federation as a result of the court case.

Protestors using the hashtag have said the Iran government “must be held to account”. 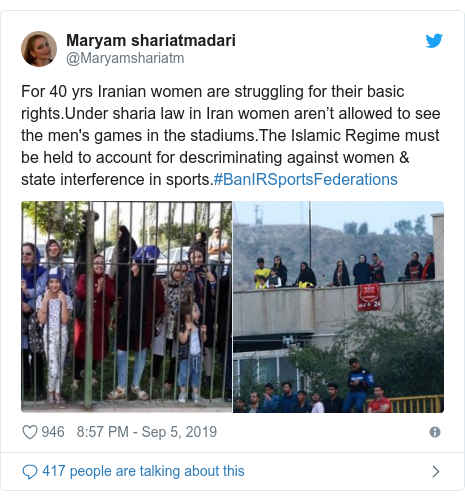 Others have pointed to the case of judoka Saeid Mollaei, who said he feared for his safety after he was told by Iranian authorities to pull out of the 2019 Judo World Championships in Japan, to avoid the prospect of facing an Israeli athlete later in the competition.

Iran does not recognise the state of Israel and forbids its athletes from competing against Israelis at international sports events.

Mollaei said he was told to withdraw from his match against Russia’s Olympic champion Khasan Khalmurzaev to avoid the prospect of facing Israel’s Sagi Muki later in the 2019 Judo World Championships. He stayed in the competition, but lost in the semi-final. Muki, who won the title, has now replaced Mollaei at the top of the world rankings for the men’s under-81kg division 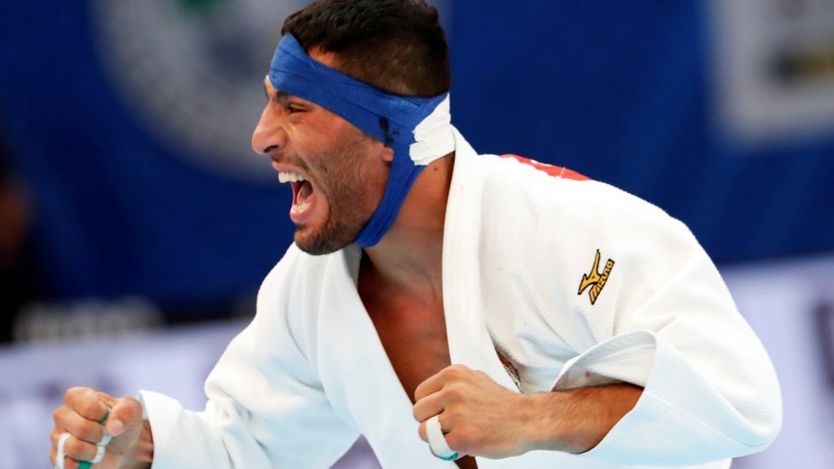 This is not the first time an Iranian athlete has allegedly been told to lose a match to prevent facing an Israeli competitor. In 2017, it was claimed that Iranian wrestler Alireza Karimi-Machiani was made to deliberately lose a match in the Senior U23 World Championship.

Karimi-Machniani’s match was stopped by his trainer while he was ahead after an Israeli athlete qualified to be his opponent in the next round. When the match resumed, the wrestler went on to lose 3-14.

Some Iranian Twitter users have labelled this as “state interference” and called for world sporting organisations to “set an example” by banning Iran from competing in world competition. 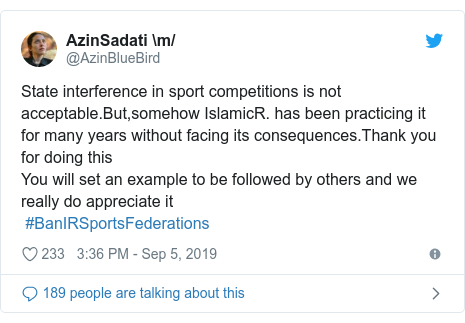