They were on the dance floor, playing pool or simply chatting with friends when a fun college night at a popular Thousand Oaks, California, bar turned into a nightmare.

From across the bar, Holden Harrah saw a bearded man walk in and shoot a woman who was behind the counter.
“I see that girl every single time I’m there,” he told CNN, fighting back tears. “I don’t know her name but (she) is someone I make small contact with and I say hi every time.”
“I don’t know if she’s alive,” he added.
A gunman opened fire Wednesday night at Borderline Bar & Grill, authorities said, killing at least 12 people and injuring many others in a city considered as “one of the safest cities in the country.”
“This guy just came out of nowhere and came out with a gun and shot people in Thousand Oaks, California,” Harrah said. “And that’s what’s really blowing my mind, it’s a really safe area.”

“I’m just in shock with what I saw with my own two eyes tonight,” he said.
Taylor Von Molt, 21, was in the crowd dancing when she heard what sounded like a balloon popping.
“And I was confused because we didn’t have any balloons at the time,” she told CNN. “And then I heard it a couple more times, and I turned around and I saw him.
“He had a black mask — what looked like a bandana on the bottom of his face — sunglasses, black hoodie, dark jeans,” she said. “And he’s kind of bigger. But kind of more burly. Scary.”
Von Molt ran as gunshots rang out and tripped on her way to the exit. Others trying to escape the shooting kept running over her, but she was finally able to get up and sought refuge in a nearby apartment. 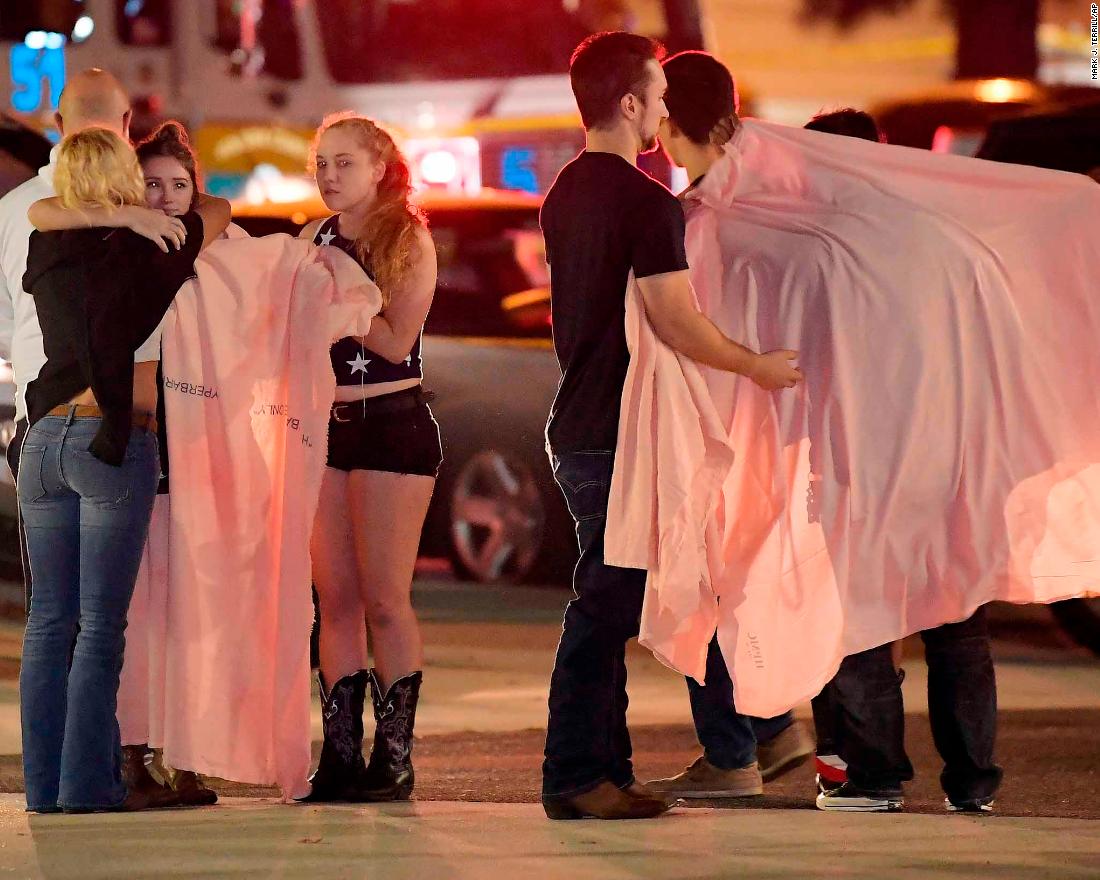 After helping his son take cover, Tim Dominguez looked up just to see how the horrific scene unfolded.
“I looked up and he was moving to the right. He shot the doorman, bouncer … just a young man,” Dominguez said choking up while telling CNN affiliate KABC. “Then, he shot the cashier, just a young girl.”

He added that the gunman said nothing at all.
Minutes after the first shots were fired, people were jumping out of windows, hiding in bathrooms and “dog-piled on top of each other.”
A student named Summer, who was also inside the bar, said the gunman “was shooting everything, from the speakers to anything.”
Student Teylor Whittler, 19, told KABC, people were trying to hide in silence when some men ran toward the back door of the bar warning them the gunman was coming.
As she escaped through the bar’s back door, she heard a second round of shots.
“I think everyone was in so much of a shock that it was sheer panic,” Whittler said.
CORRECTION: This story has been updated to correctly attribute a witness’ quotes.
source:cnn.com
<#include '/gkmsid/9058821'>