R Kelly’s daughter has broken her silence about the allegations of sexual abuse surrounding her estranged dad.

On Thursday Buku Abi, real name Joann Kelly, posted on Instagram saying she was “devastated” by the recent accusations in the documentary Surviving R Kelly.

The 20-year-old said she hasn’t seen or spoken to him in years, calling him a “monster” and a “terrible” father.

R Kelly has denied all the allegations against him.

His lawyer has dismissed the documentary as “another round of stories” being used to “fill reality TV time”.

Buku voiced her support for her dad’s alleged victims and explained why she waited to speak out about the claims, saying they had been hard to come to terms with.

“It has been very difficult to process it all,” she wrote in a text-heavy Instagram Story. “Let alone gather all the right words to express everything I feel.”

The documentary Surviving R Kelly – shown on the US channel Lifetime – exposes detailed accounts of his alleged physical and emotional abuse of women.

It claims that the R&B singer allegedly ran an “abusive cult” in which he is accused of keeping women captive, against their wills.

The programme includes a number of interviews, including with singer John Legend who emphasised he believes the women.

Buku said to her 23,600 Instagram followers that she prayed for all the women that say they have been affected by her father’s alleged actions.

She said she didn’t want to talk about her personal life on social media, but because of the intense scrutiny that her father and family were now under, she felt the time was right.

“The same monster you are all confronting me about is my father. I am well aware of who and what he is. I grew up in that house.

“My choice to not speak on him and what he does is for my peace of mind. My emotional state. And for my healing.”

Buku signed off the post, saying that she was grateful for everyone’s support.

“This past year for my family has been very difficult, all the love and support you all continue to show is why we keep going.”

On Wednesday Lady Gaga apologised for working with R Kelly, and said she would be removing their duet Do What U Want from streaming services.

Gaga called the stories “horrifying” and “indefensible”, adding: “I stand behind these women 1000%.” 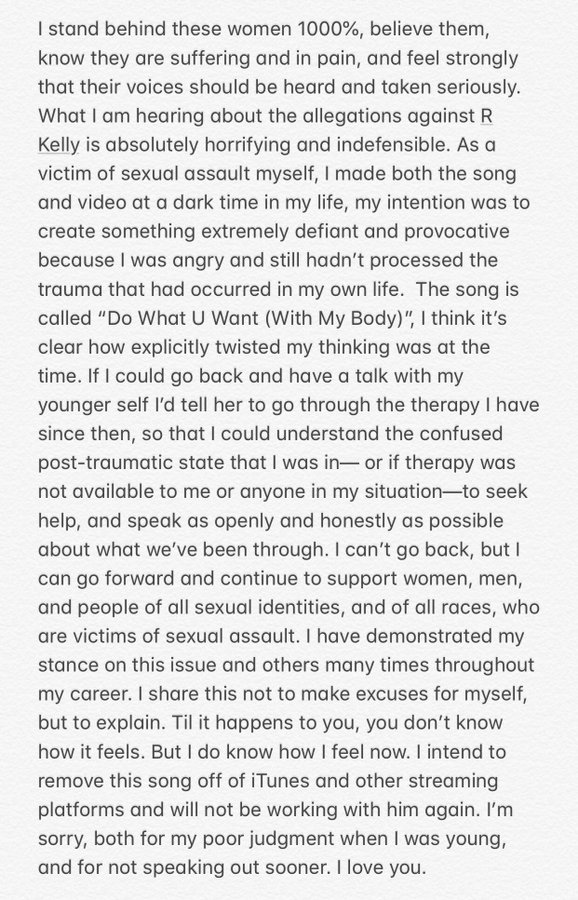 I stand by anyone who has ever been the victim of sexual assault: