Africans have come out to boycott South Africa after days of looting and violence targeting foreigners in which five people died.

Nigerian singers and Zambia’s football team are among those in the boycott.

The country has become a magnet for migrants from other parts of Africa. It has one of the continent’s biggest and most developed economies.

Who has boycotted South Africa?

He tweeted that he himself had had his own “xenophobic experiences at the hands of South Africans ” in 2017.

Another Nigerian singer, Tiwa Savage, announced on Twitter she was pulling out of a concert she had planned to perform at in South Africa in September, condemning “the barbaric butchering of my people”.

I refuse to watch the barbaric butchering of my people in SA. This is SICK. For this reason I will NOT be performing at the upcoming DSTV delicious Festival in Johannesburg on the 21st of September. My prayers are with all the victims and families affected by this.

28.9K people are talking about this
Report

The Nigerian government has also boycotted the World Economic Forum meeting in Cape Town. Vice-president Yemi Osinbajo was originally expected to attend the regional meeting between business leaders and governments.

And the country has issued a travel warning to its citizens, tweets Nigerian President Muhammadu Buhari’s assistant:

#Xenophobia: A travel advisory issued by Ministry of Foreign Affairs.

…”due to the tension created by the attacks, the Government of Nigeria wished to advice Nigerians to avoid travelling to high risk and volatile areas until the situation is brought under control.” 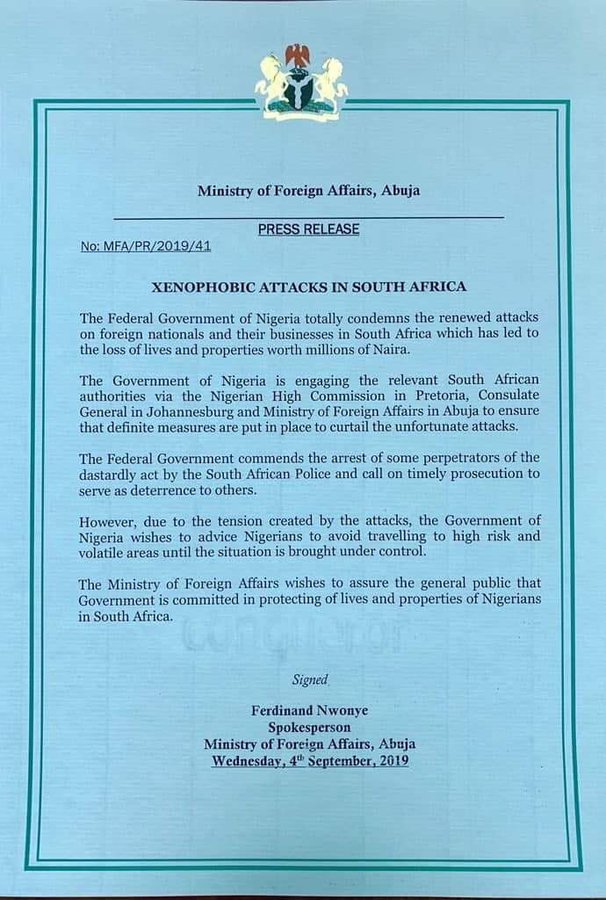 209 people are talking about this

Zambia’s football association has cancelled an international friendly match against South Africa scheduled to take place on Saturday in the capital, Lusaka.

“This is because of the security concerns, you never know what can happen,” Football Association of Zambia secretary general Adrian Kashala, told AFP news agency. “We want to be sure of the security of [the] visiting team,” he added.

What are the boycotters angry about?

They are angry about South Africans attacking other Africans living in the country.

Since Monday, mobs have been looting shops and torching trucks driven by foreigners in various parts of South Africa.

Police fired tear gas, rubber bullets and stun grenades in an attempt to stop the looting.

Police say five people have been killed but have not revealed their identities or nationalities.

At least 189 people have been arrested.

What sparked the riots?

The attacks on foreign stores began a day after South African truckers started a nationwide strike on Sunday to protest against the employment of foreign drivers. They blocked roads and torched foreign-driven vehicles mainly in the south-western KwaZulu-Natal province.

It comes at a time of high unemployment and some South Africans blame foreigners for taking their jobs.

The unemployment rate in South Africa is nearly 28%, the highest since the labour force survey was introduced 11 years ago.

But others say drug-dealing blamed on foreigners sparked off these riots.

Has violence against foreigners happened before?

South Africa experienced its worst outbreak of violence against foreigners in 2008, when more than 60 people died.

In 2015 unrest in the cities of Johannesburg and Durban claimed seven lives as immigrants were hunted down and attacked by gangs. Attacks became so bad that a sports field south of Durban was made into a makeshift refugee camp for Africans escaping the violent looters.

And then in March this year, three people died after about 100 people attacked mostly foreign-owned small food shops in Durban.