This story was originally published by Now To Love and is republished with permission.

Sonny Bill Williams has given a heartfelt interview about his journey to finding his Muslim faith, and has spoken for the first time about his mother converting to Islam following the Christchurch terror attack.

The All Blacks star sat down with British Muslim convert John Fontain in the wake of the March 15th mosque attacks.

He spoke about what the religion means to him, how he has struggled with acceptance in society, the toll the Christchurch attack has taken on his family and how special it was to have his mum Lee accept the Islamic faith alongside him. KAI SCHWOERER/GETTY IMAGES
All Black Sonny Bill Williams is opening up over his faith, in the aftermath of the Christchurch terror attack.
Williams revealed that it was when he was living in Australia and playing league for the Bulldogs that he first learned about Islam.

“I grew up as a Christian, and to be honest, I always felt a little bit uncomfortable – not about the message, but the environment,” he said.

“People at the time that I knew in Australia … they always had this aura around them, that they were happy, they were never sad … always inviting me round … So that’s how I first learnt about Islam.”

It was a few years later in France when he converted to the faith, after sensationally walking out on his multi-million dollar NRL contract in 2008 to play rugby for Toulon. 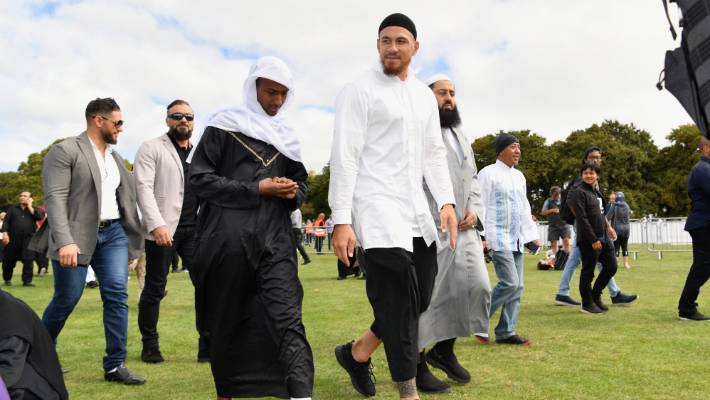 “When I first made my Shahada (profession of faith) my knowledge of the dīn (Muslim way of life) was pretty limited,” he explained.

It was his friendship with a local Tunisian family that solidified his belief in “the beauty of Islam,” and ultimately led to him learning more about the religion.

“It was a family of four or five (children) and they had a one bedroom house and they all slept in the lounge room,” he explained.

“I spent the majority of my time there … plenty of time sleeping on the floor in the house.”

“The contentment, the solace, the happiness that they had in that household… was beautiful… so that’s how I really started getting into it (Islam),” he explained.

WIlliams also opened up about how much it meant to have his mum convert to Islam in the week after the Christchurch mosque terror attack.

Illiams also opened up about how much it meant to have his mum convert to Islam in the week after the Christchurch mosque terror attack.

“It was very very special,” he said as he wiped away a tear.

“That’s the beauty of Muslims is that we see this dunya (world) as an attachment. We’re just passengers passing through and inshallah (God willing) we stand in Allah’s grace. And that’s been my mindset for years.

“I’ve not always been perfect and I’ve had always human frailties but I strive. I strive to better myself, and humbly I have a beautiful wife, I have beautiful children. Yes we make mistakes, but in tough times, in stormy weather we have our purpose. We have our shining beacon.

“I’m so blessed that my mum has seen that … She’s just seen how its transformed our lives,” he said, referring also to his older brother John who converted to Islam years ago.

He also spoke about the toll the attacks had taken on his wife Alana.

“The hardest thing about the tragic events (in Christchurch) … is that for me … having to leave home and having my wife cry, knowing that she’s upset and she’s scared because she is a Muslim, it’s such a sad feeling.

“Finding acceptance in a community where a lot of people struggle to understand Islam has been difficult for Sonny Bill, but he has done his best to demystify the religion.

“The hardest thing for me is I live in a society where the majority are Christians or Catholics. Our Island brothers and sisters … we have a strong religious background.

“But the message I try and push is that I don’t hate you. Because the message that you guys promote is one of beauty as well … And I feel like that’s where we need to come together in our community. That, OK, you’re a Catholic, you’re Christian, you might be an atheist, but if your message and your purpose is one of trying to be positive in the community, then I’m down with that.”

He finished with a plea to the non-Muslim community.

“If there’s something bubbling under the surface that you feel is hatred towards us, I’d suggest reaching out to someone in your community that is a Muslim because they’ll reach back tenfold and show you what is taught in our religion – and that is love.”