Hundreds of millions of euros have been pledged to help rebuild Notre-Dame after a devastating fire partially destroyed the French cathedral.

The fire, declared fully extinguished some 15 hours after it began, ravaged the 850-year-old building’s roof and caused its spire to collapse.

But firefighters who worked through the night managed to save the Paris landmark’s main stone structure, including its two towers.

The cause of the fire is not yet clear.

Paris public prosecutor Rémy Heitz said his office was “favouring the theory of an accident”, but had assigned 50 people to work on what he believed would be a “long” and “complex” investigation.

Other officials have suggested it could be linked to extensive renovation works taking place at the cathedral.

Thoughts are now turning to how Notre-Dame will be rebuilt.

French President Emmanuel Macron vowed to reconstruct the historic building even as the fire still burned, while a number of companies and business tycoons have so far pledged about €600m ($677m; £519m) between them.

Offers of help with the reconstruction have also poured in from around the globe, with European Council President Donald Tusk calling on EU member states to rally round.

The blaze was discovered at 18:43 (16:43 GMT), and firefighters were called. The flames quickly reached the roof of the cathedral, destroying the wooden interior before toppling the spire.

Fears grew that the cathedral’s famous towers would also be destroyed. 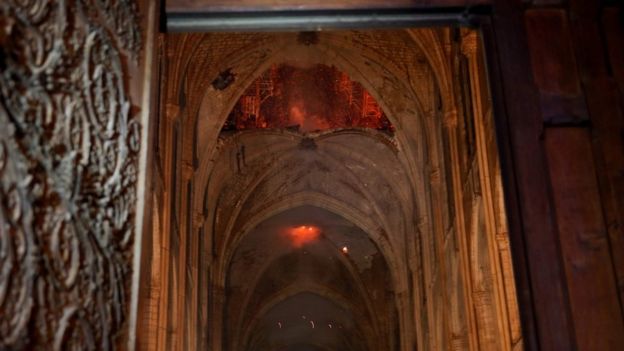 But while a number of fires did begin in the towers, French Deputy Interior Minister Laurent Nuñez said they were successfully stopped before they could spread.

By the early hours of Tuesday, the fire was declared under control, with the Paris fire service saying it was fully extinguished by 10:00 local time (08:00 GMT).

What is the damage?

Search teams had already begun assessing the extent of the damage when dawn broke over the French capital. The cathedral’s blackened stone and charred scaffolding were revealed to onlookers for the first time.

Fire brigade spokesman Lt-Col Gabriel Plus said: “The whole of the roof has been devastated… a part of the vault has collapsed, the spire is no more.”

However, it could have been much worse. Mr Nuñez said that, had fire crews not entered the building, “without doubt it would have collapsed”, French newspaper Le Monde reported.

Photos appear to show that at least one of the cathedral’s famed rose windows has survived, although there are concerns for some of the other stained-glass windows. 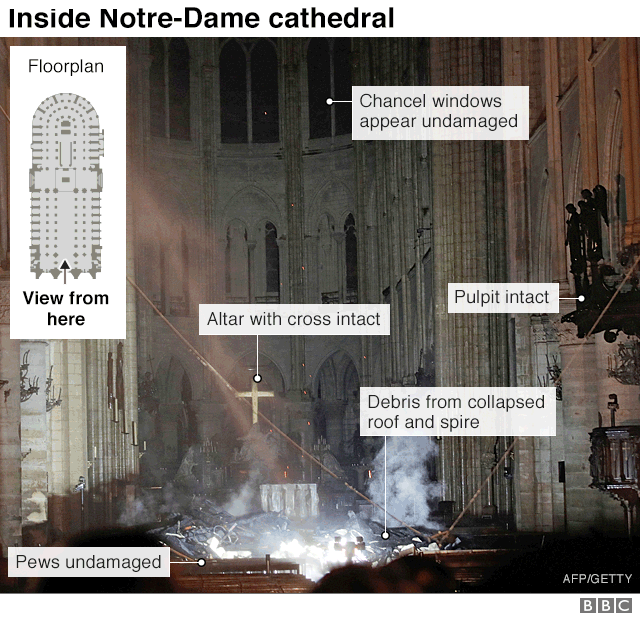 Franck Riester, France’s culture minister, warned that while the principal structure had been saved, the building was still unstable.

Mr Nuñez said that “overall”, the structure was in good condition, but that “some vulnerabilities” had been identified in the stone vaults and the remainder of the building’s ceiling.

Experts have not yet been allowed on site to assess the damage, due to the dangers.

Individuals and groups are mobilising to help rebuild Notre-Dame. Hundreds of millions of euros have already been pledged.

Air France said in a statement that the company would offer free flights to anyone involved in the reconstruction.

Another €200m was pledged by Bernard Arnault’s family and their company LVMH – a business empire which includes Louis Vuitton and Sephora – on Tuesday morning, according to Reuters news agency.

French cosmetics giant L’Oreal and its founding Bettencourt family have promised to give a further €200m to the reconstruction effort. Total, the French oil giant, has also pledged €100m.

The French charity Fondation du Patrimoine is launching an international appeal for funds for the cathedral, a Unesco World Heritage site.

“We’ll rebuild this cathedral all together and it’s undoubtedly part of the French destiny and the project we’ll have for the coming years,” said Mr Macron, in an emotional address on Monday night.