In the last two days, there have been heated discussions on social media revolving discrimination around hijab-wearing during a beauty pageant.

The controversy started when one Zainab Alhassan, a student at the Ghana Institute of Journalism, took to her Facebook page to narrate how she lost an opportunity to represent the Upper West Region at the 2020 TV3 Ghana Most Beautiful audition in Kumasi.

In her words, “During the auditions I did great. I didn’t flop for once. I didn’t shake or become super nervous. In fact, I was exuding confidence but it took a different turn when the issue of my hijab came up. I was asked why I wore it to the auditions; I explained. Again I was asked if I will take it off in the course of the contest if I’m asked due to one activity or the other. I told them in this day and age, there’s really nothing that one cannot do in her hijab. Another question was asked that since I’m insisting I will not remove it ‘do you bath in your hijab?’ As ridiculous as that question was I still answered. Oh, I was also asked how I make my hair. I told them I go to the salon obviously. In fact, about 40% of the questions asked were based on my hijab.

The time of reckoning came when they were to pick those moving on to the next stage. They mention your name and tell you your fate. I was the fourth to be called and I stepped forward and he said: ‘Zainab you are very good but since you decided not to remove your hijab there is nothing we can do.’ I was devastated but I kept it cool. I am sure the girls there selected to move to the next stage were very good no doubt, and I cannot tell if they did better than me which is very possible. What I did not understand why my hijab could be a hindering factor to my progress in the competition.”

The quote above culled from her long piece on her Facebook page has generated heated discussion from the Muslim community, with majority backing TV3 and some supporting Ms. Zainab.

According to the group that supports TV3 on their decision to disqualify Ms Zainab, the Islam religion in the first place does not permit a lady to participate in a public contest that exposes her beauty and body shape to the world.

The group also reiterated that TV3 GMB as a private business organisation has its own rules and regulations that should also be respected regardless of one’s religious background.

Tamimu Issah, Former Acting Spokesperson for the Ghana Football Association who is a staunch Muslim backed the disqualification and has asked those ranting to spare Ghanaians and Islam from what he calls a baseless defense.

“What’s the point in seeking to participate in a beauty contest with your head covered and other parts of your body seductively exposed? Save your vigour for a progressive pro hijab campaigns like respecting the rights of female Muslim students, nurses, etc to wear their hijab without discrimination.

This fight with TV3 is like a Muslim getting angry for being denied access to a pork and wine party. Leave TV3 and Ghana’s Most Beautiful alone! It is their show and they set the rules!!!” he wrote on his Facebook page.

Saddick Addams, a popular sports presenter and also a devout Muslim thought it was wrong for Zainab to force a private business like TV3 GMB to accept her religion when she definitely knew the rules and regulations of what she was auditioning for in the first place.

“If she was thrown out of a public school, a public office or hospital, I’d be here to defend it. But you don’t carry your religion and its beliefs into someone’s private business and come to social media to court unnecessary sympathy.

Why does anyone think that a private program or event that has set their own standard criteria and requirements should admit them together with their religious beliefs? She can go and partake in a Muslim beauty contest that allows pageants to wear Abaaya and Hijab.”

However, Ms Zainab and her supporters thought otherwise. They claim per Ghana’s Constitution which states that a person shall not be discriminated against on grounds of gender, race, colour, ethnic origin, religion, creed or social or economic status, flaws TV3’s reasons for disqualifying Ms. Zainab.

Speaking to GhanaWeb in a conversation, Lawyer Abulais Yaro Haruna said every beauty pageant has rules and regulations that candidates who want to participate should know.

However, he expalined that these rules and regulations should not supersede what Ghana’s constitution states about discrimination.

In 2019, the Muslim community in Ghana expressed concern over what it calls discrimination and marginalization against its women by a section of the public due to their faith.

According to the group the hijab is part of the identity of a Muslim woman, which must be accepted by all, irrespective of one’s belief. 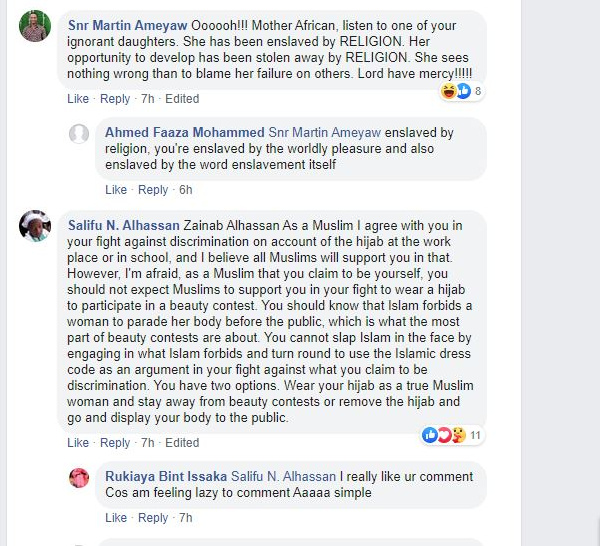 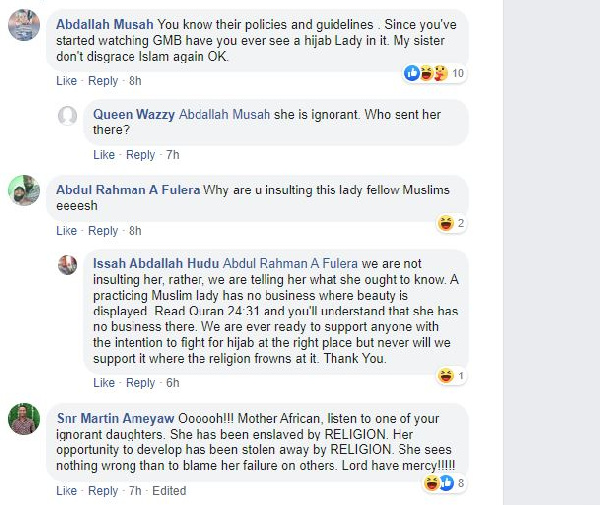