Jurgen Klopp is still without a trophy during his Liverpool reign but his third full season has yielded success in his previous jobs. Adam Bate examines why there is good reason for Klopp to be particularly optimistic going into the campaign.

“If we sit here in four years, I think we win one title.” Those were the words of Jurgen Klopp in his very first press conference as Liverpool manager in October 2015. Something may have been lost in translation – title can refer to a trophy of any kind rather than the league championship – but this season is still the last chance for him to deliver on his prediction.

Liverpool have gone close. There was a League Cup final within months of him taking over and a Europa League final that year too. In May, Klopp took the club to the Champions League final only to come up short against Real Madrid. His Liverpool have thrilled fans and entertained everyone else with their fast-paced football. Only silverware has eluded him.

Jose Mourinho is acutely aware of this fact. In the wake of Liverpool’s summer spending, the Manchester United boss did not waste the chance to ramp up the pressure on his rival. “Maybe this season finally you demand that they win,” he told the media. “I think you have to be fair and now you have to demand.” It was typical Mourinho but he’s got a point.

The good news for Klopp is that while it is at this point that Mourinho’s machinations can grate and the project begins to unravel, history suggests that the third full season is the one in which the German enjoys unprecedented success. It was at this stage that he took Mainz into the Bundesliga for the first time. With Borussia Dortmund, he won the thing.

Could history repeat itself with Liverpool? There have been enough windows now for Klopp to reshape the squad into one that can implement his ideas and there is a growing sense that the players are attuned to his style. It is fifteen months since Liverpool last lost a Premier League game at Anfield. The team now knows what he wants but it has taken time.

It was after the 4-3 win at Arsenal on the opening weekend of his first full season in charge that Klopp highlighted the problem. For the first goal, Liverpool lost the ball in their own half and gave Alex Iwobi time to pick out Theo Walcott, unmarked, on the edge of the box.

Klopp insisted afterwards that they had spent two hours in training working out precisely how to stop this sort of thing from happening. The issue was that it was not instinctive.

Klopp: We must be ready to fight

“What we need is for the decision to be made here not here,” he explained, pointing to his gut, then his head. “We are in the head right now. Time together will help. So will experience together, success and good results.” Gesticulating to his gut once more, he added: “At some point it will be here and then we can use it more easily.”

Repetition is the key. The now departed Philippe Coutinho told a tale of how he had worked long and hard on a routine where they would play three short passes before switching the play with a longer pass. To the untrained eye it might have looked like chaos but there was method to the Klopp madness. Even the heaviest of metal bands spend time in the studio.

Coutinho saw it as an attempt to “tap into the perfect mental state to be creative” and that was confirmed by coach Pep Lijnders, the Dutchman who has since returned for a second stint as first-team coach. The reason for the repetition, says Lijnders, is not because Klopp wants his players to become mechanical in their movements. He wants it to feel natural.

There are echoes of Klopp’s work with Dortmund in this respect. “What is happening here is just crazy,” he said with a trademark grin after the club’s second consecutive Bundesliga title win. But this was the illusion of crazy. In fact, it was the culmination of years of honing his style of play with a young group of players – the youngest ever to win the Bundesliga.

During that first title triumph, Cesare Prandelli, the then head coach of the Italy national team, went to watch Klopp on the training ground and was wowed by his drills. Prandelli said it reminded him of Arrigo Sacchi’s AC Milan in terms of how organised that they were without the ball. It was an appropriate reference point given Klopp’s own influences.

Helmut Gross might not be a household name but he was the first German coach to really develop ideas around the importance of zonal marking and a defensive structure that was focused on the location of the ball rather than the opponent. Together with his protégé Ralf Rangnick, they watched so many tapes of Sacchi’s Milan that they wore out the video recorder. 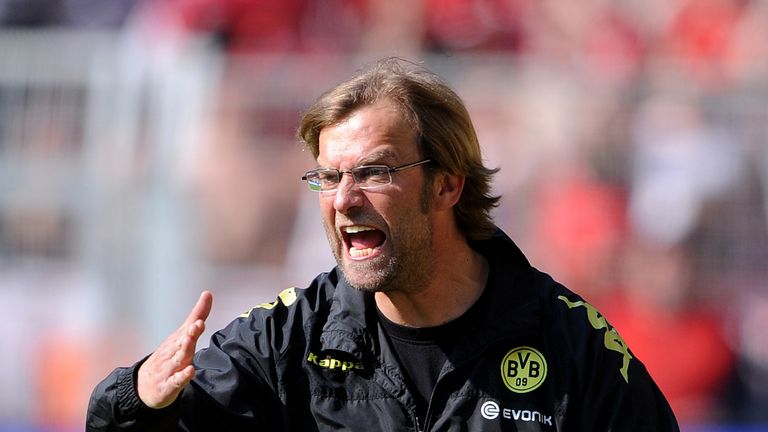 Three players swarm to recapture the ball and then the opening is created. This sometimes looks chaotic, but it is usually controlled chaos.

In an interview with Frankfurter Allgemeine Zeitung, Gross summed up Klopp’s approach well. “I find it beautiful when a risky pass is played, the ball is lost, but three players swarm to recapture the ball and then the opening is created,” he said when discussing that great Dortmund team. “This sometimes looks chaotic, but it is usually controlled chaos.”

That was exactly what Klopp’s old team Mainz discovered when Dortmund beat them that season. Christian Heidel, the Mainz general manager who had appointed Klopp to his first coaching role, could only marvel at what he had seen. “At times, they had three men attacking our man in possession,” he said. “They’re more advanced than us in that respect.”

Get LFCTV for only £7 a month

Liverpool fans, watch every preseason game live on LFCTV. Only £7 a month with no contract.

The lesson that Klopp professes to have learned from his Mainz days is that management is not about finding the best 11 players, it is about finding the 11 that is most likely to win. “Coaches like Klopp have shown that football is a team sport and that you can do a lot as a group,” said Gross. But just as it has at Liverpool, that process took time at Dortmund.

Klopp had to move on senior players such as Alexander Frei and Mladen Petric, despite their popularity with supporters. “If you had asked 100,000 BVB fans which two players had to play all the time, they would have named them,” said Rangnick. “But Klopp knew they were not able to deliver the aggressive pressing that he wanted.”

It was the signings of Robert Lewandowski and Shinji Kagawa in 2010 that paved the way for silverware. Dortmund paid just over £4m for the pair. Liverpool have spent rather more than that in bringing Naby Keita and Fabinho to the club, with Alisson also arriving to solve their goalkeeping problem, but the principle has remained exactly the same.

Rangnick has described Keita as one of the best that he has worked with in two decades in football and the midfielder is certainly well schooled in the pressing game. He has recovered possession 452 times in the past two seasons – 70 more than any other Bundesliga player. Keita adds creativity to Liverpool too, but it is his urgency that will be instantly recognisable.

Klopp’s machine is becoming well oiled, something that has become particularly apparent in their defensive work. The club-record signing of Virgil van Dijk was important, of course. Andrew Robertson has emerged too. But it is about more than the individuals. There has been a gradual trend towards greater defensive organisation.

Liverpool conceded 11 goals directly from errors in Klopp’s first season and 10 in his second. Last year, that figure was down to four. The number of errors leading to a shot of any kind has gone from 33 in that first campaign to 20 in the second and just 12 last season. The total number of shots on target that Liverpool have faced has also decreased year on year.

On the face of it, Klopp has delivered back-to-back fourth-place finishes. Ostensibly, the progress has plateaued. But that is not the feeling at their Melwood training ground and it is not the feeling at Anfield either. The belief there is that Liverpool are getting better; that they are working towards something. The underlying numbers suggest that this is true.

The club’s summer business adds strength to the argument that the best is yet to come. But the real confidence comes from the fact that this coach has shown before that when he is afforded the time to fashion a team in his image, good things happen. Klopp’s own trophy deadline now looms large. But the signs are there that his prediction could yet come true.