The award-winning journalist remarked that months to the 2016 general elections, the NPP chastised the former government led by H.E John Mahama.

The NPP he underscored accused the government of benefitting from corruption-related activities alleging that the Mahama-led administration did little in sending out a clear message.

However, Manasseh Azure acknowledged that despite the bashing received by the previous government, Akufo-Addo administration seems to be doing same.

Find below the content of the article written by the ace journalist.

When former President John Mahama and the National Democratic Congress (NDC) accuse you of winning the 2016 elections through deceit, it is easy to dismiss such criticism as baseless political talk.

When one objectively separates that message from the messenger, however, one is confronted not only with deceit but fraud, which the government perpetuates against the already impoverished republic.

In the coming days, I will reveal or rather remind you about some of these rots. Today, however, I want an answer to one simple question.

Mr. President, do you benefit directly from this theft? Before you respond, let me explain.

On November 16, 2016, three weeks to the 2016 election, your party, the New Patriotic Party (NPP) held a news conference in Accra to address a 500 million cedis corruption scandal. That press conference was addressed by then Policy Advisor of the NPP, Mr. Boakye Agyarko. The contract in question was the sanitation contract under the Youth Employment Agency (YEA), previously known as the Ghana Youth Employment Entrepreneurial Development Agency (GYEEDA).

“This act of corruption is a matter for which Ghanaians must demand, and deserve answers to,” Mr. Agyarko said.

He continued, “We also need to note the fact that the Board of the Youth Employment Agency is being asked to take all necessary steps to ratify the sanitation contract for 2013 – 2015. Since this contact has expired and not in operation, why would they ratify it by backdating?”

Mr. President, the GYEEDA scandal was one of your main campaign weapons in the 2016 election. It was one of the main reasons you and the NPP said the John Mahama government was incurably corrupt and must be changed. And one of the most outrageous GYEEDA contracts in this scandal was started by President John Agyekum Kufuor’s government and aggravated in March 2011.

According to that arrangement, which exists till date, about 45,000 sweepers have been placed on the sanitation programme with the YEA. Each month, GHc22.5 million of the taxpayers’ money is dolled out to fund this contract. Out of this, GHc only 4.5 million is spent on paying salaries of the 45,000 workers while a whopping GHc18. Million cedis is paid to Zoomlion Ghana Limited as management fees.

So the blue-wearing sweepers across the country, who battle with the nation’s filth and stench, are allocated GHc500 each month but the contract says Zoomlion should keep GHc400 and pay the workers GHc100 cedis. This means, in a year, each worker gets GHc6,000 cedis allocation from the state; Zoomlion makes GHc4,800 while the worker gets GHc 1200 ($245) a year from that allocation.

In 2013, Joy FM conducted a comprehensive investigation into the operations of GYEEDA, which revealed massive corruption in the scheme. One of the contracts that came under scrutiny was the sanitation contract with Zoomlion. Contrary to Zoomlion’s claim that it used the management fees to provide tools and equipment to aid the workers, Joy News found out across the country that the workers had no tools to work with. In Damongo in the Northern Region, for instance, the NGO called World Vision, became so worried about the deplorable plight of the workers that it donated tools and equipment to assist them deliver their services, for which Zoomlion was paid.

If anyone doubted Joy FM’s expose, the committee set up by government to probe the scandal came out with more damning revelations about Zoomlion and its operation of this contract. Page 131 of the GYEEDA report, which is online, outlines serious overcharges Zoomlion made on the state for this contract. The following are three paragraphs from that report about the contract from 2011 to 2013:

“By Zoomlion’s own admission, the cost of a fully fitted tricycle is GHS1,200 and they are replaced every two years. The total number of tricycles in circulation is less than 10,000 (about 6,000). Even assuming 10,000 tricycles, Zoomlion requires only GHS12m every two years to replace them but charges the MOYS GHS37.5m an excess of over GHS25.5m” 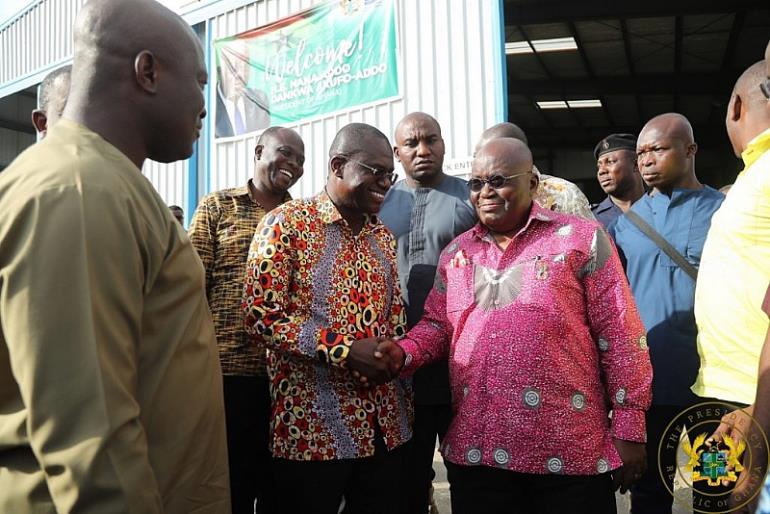 President Akufo-Addo was widely criticised when he visited Jospong and openly praised and encouraged Joseph Siaw Agyepong (CEO of Zoomlion).

The GYEEDA Committee did not end there. It stated that the contract did not pas the value for money test and should, therefore, be discontinued. Any future engagement, the committee noted, should be opened to competitive bidding. Fortunately for the government, it did not have to battle with Zoomlion over the termination of this contract. By the time this report came out, that contract had already expired in February 2013.

The John Mahama government did not terminate or renew the contract. It kept paying Zoomlion and by November 2016, nearly GHc500 million had accrued. This is why the NPP held that news conference. This was what necessitated the NPP’s press conference.

At that press conference, the NPP said ,“The President could not prosecute [Zoomlion, rLG and other big companies implicated in the GYEEDA scandal] because he directly benefited from the theft.” They said this contract was a fraudulent arrangement by President Mahama and his government to defraud the state. They said it was insensitive to give Zoomlion so much and the poor sweepers so little.

Mr. President, almost two years into your presidency, this contract still exists in the wake of more disturbing circumstances. There has not been any cancellation or prosecution.

In February this year, the YEA, under your watch, announced it would end this contract by June 2018. At a head count conducted by the YEA, only 38, 848 out of the 45,320 number of beneficiaries showed up. Sources in the YEA told me the 38,848 appeared inflated because they felt some of the YEA coordinators at the district level were compromised.

The YEA was also discovered that most of the beneficiaries were recruited without recourse to the Agency.

“Therefore, no appointment letters were issued to these beneficiaries…a practice the agency finds unacceptable. Until now the service provider [Zoomlion] has been unable to furnish the Agency with the payment record of beneficiaries on its payroll,” the CEO of YEA, Justin Kodua Frimpong disclosed at a press conference.

He told Ghanaians all that mess would be over by June 2018, when the YEA would engage service providers under competitive bidding. June 2018 came and went. And the contract has not been cancelled or reviewed.

Mr. President, are you unable to act “because you benefit directly from the theft”?

“If YEA is desirous of terminating the Agreement it ought to serve a written termination notice of three months on Zoomlion in Accordance with Article 23 of the 2011 Agreement.”

Three months after receiving this advice from the Attorney general, no notice has been served on Zoomlion, even though Zoomlion had, in a press release, “commended the Youth Employment Agency (YEA) for its plans to restructure the Sanitation Module of the Youth Employment Programme”.

In 2016, when the NPP accused John Mahama and his government of fraud in relation to this contract, the government at the time had said a number of steps should be taken before Zoomlion was paid since it had no existing contract. The Mahama government said the board should take steps to ratify the agreement. John Mahama’s cabinet also said there should be a comprehensive audit on the contract before further payments were made.

When the “incorruptible” government of Akufo-Addo took over, payments were made without the ratification of the contract. But that is not all.

“We are unable to certify payments of the arrears in the sum of GHc441 million to Zoomlion Ghana Ltd because: (i) we have not seen or verified contracts covering the periods to which the payment request relates – i.e. 2013-2015 and 2015 to 2017, (ii) we have not seen any evidence of services provided and certification by the District Assemblies in line with Section 16(1)(a) of ACT 654, (iii) we have not received other relevant documents mentioned above, and (iv) of the refusal of the Administrator of DACF [District Assemblies Common Fund] to grant us access to their payment records to confirm or deny payments already made to Zoomlion Ghana Limited.”

This damning letter from the audit services, the YEA’s headcount, the Joy FM investigative findings, the GYEEDA Committee’s report and other similar audit reports on Zoomlion and this problematic contract are enough to push any government that is serious about fighting corruption and safeguarding the national purse to action.

I am aware this contract has been discussed in your cabinet several times. I am also aware the senior minister is has ordered another headcount. I have received reports that regional and district directors of the YEA are secretly recruiting more sweepers to make up the numbers. The purpose for the headcount will be defeated, but there are enough reasons and evidence to act on this contract. So I have been asking myself many questions.

Why is President Akufo-Addo refusing to act? Is it because you are “benefitting directly from the theft” which your party accused President Mahama of? Nana, why would a lawyer of your calibre superintend over a government that pays a company GHc270 million each year without a written contract? Do you care about the men and women who battle with the nation’s filth and go home each month with GHc 100 or $20? Why would a human rights lawyer of your standing supervise this modern-day slavery?

Mr. President, these are the questions that trouble my mind, and any time I try to find answers, Mr. Boakye Agyarko’s words come back to mind: “The President could not prosecute because he directly benefited from the theft.”

Sir, prove me and those who still have some modicum of trust in your integrity wrong.