An 18-year-old mother has been adjudged the best student in the Afadzato South District in the Volta Region.

Ahiati Millicent Yawa is a JHS 3 student at Tafi Abuife D/A JHS, who has a year-old baby boy.

The determined nursing mother came along with her young baby boy to participate at an end-of -year literacy competition held in the district capital, Golo Kuati.

Ahiati Millicent, who represented her school, excelled in the essay writing competition and mathematics quiz, scoring the highest mark among other six competitors, making her the overall winner to the surprise of everyone. 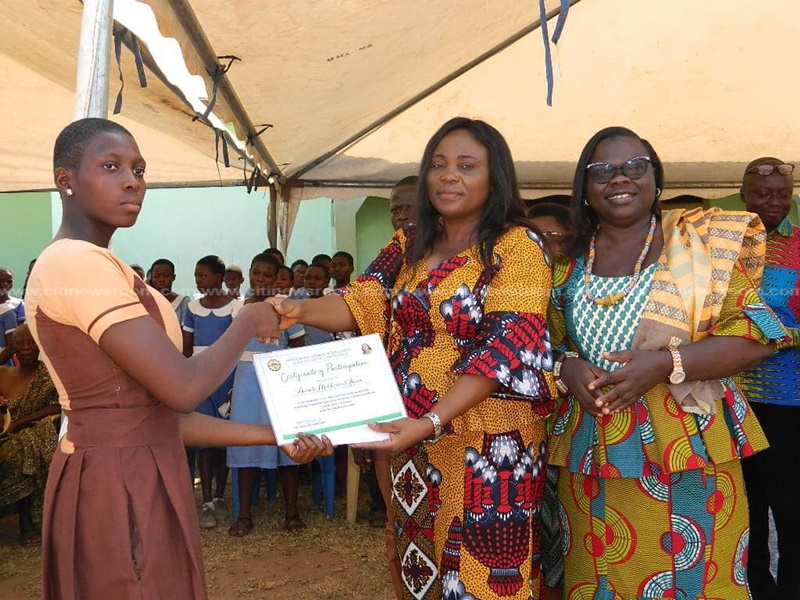 Both teachers and parents present applauded her for being optimistic about her education despite having a young baby in her hand.

The quiz was organized by the Member of Parliament for the area, Angela Alorwu, through an initiative known as “Assessment for Improving Learning”, which she implemented in the area to improve literacy among students.

The MP awarded the girl with an amount of GHS500.00, a student mattress and an SHS scholarship.

Addressing the media after the competition, the MP praised the enthusiastic young mother for the tremendous record she has chalked, and advised the students to take their studies seriously.

She charged community elders to sack pupils at funeral grounds and other functions that is of no benefit to their education.

Madam Angela Alorwu advised the parents and guardians present not to reject their wards who get pregnant, but rather offer them support.

She commended teachers and heads of the various schools for their contributions, and revealed that more of such activity is ahead to improve on teaching and learning.

The excited Ahiati Millicent Yawa, expressed gratitude to the MP and called on her to keep the initiative alive.

“I can’t say because I have given birth so I have to stay in the house, no. I have to continue my education; I believe in myself that I can make it.”

This is significant for Millicent coming from a continent where most teenage girls after giving birth are denied education often as a form of punishment. Others also wish to pursue education, but due to financial constraints they’re often unable to.

Even in Ghana, there are cases where pregnant girls are denied from writing exams, and this happens in some African countries.

A lot of teenage girls, particularly in rural Ghana, become vulnerable to men for survival due to poverty, and in some cases lack of parental care. Their situation is often compounded by their poor knowledge on reproductive health issues such as the use of contraceptives.

The other three students also won between Ghc400.00 to Ghc200.00 with student mattresses.

In pictures: DirectAid donates to the people of Madina and its environs