Mobile money data has become a source of a feud between the Communications ministry demanding it and the Central Bank which is keeping it.

Letters from the Communications ministry contain requests wrapped in strong words asking the Bank of Ghana (BoG) to release the data to a private contractor, Kelni GVG, tasked to verify revenue generated by telcos.

One of the letters signed by Anastasia Marfo from the Communications ministry said the “level of disrespect exhibited by the bank in this matter is simply appalling”.

This was after the central bank in a letter, signed by the secretary, Frances Van-Hein Sackey, insisted the request by the ministry is an invasion of privacy of mobile money subscribers.

The Communications ministry wants disclosure of customer balances, transaction amounts, date and time of the transactions.

But the letter from the Central Bank explained that handing over such data would breach the Guidelines of Electronic Money Issuers and the Data Protection Act. 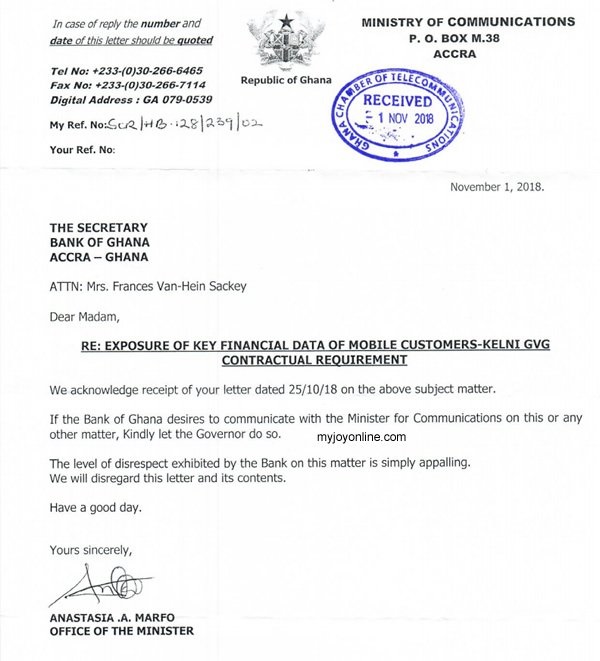 The Bank in a letter insisted that even though it is willing to work with the various regulators, the current laws do not allow it to hand over such confidential data to Kelni GVG.

The secretary of the Bank of Ghana said the Communications ministry’s authority over telcos ends when it comes to mobile money transactions.

BoG has, therefore, written to the various telcos to disregard the earlier letter from the Communications Ministry requesting them to hand over the data.

There have been some informal meetings between the two parties and even the Ministry of Finance to resolve the issue.

However, it is not clear for now whether, the Communications Ministry, National Communications Authority (NCA) and Kelni GVG have agreed to review their position after these informal meetings.

Mobile Money transactions which hit Gh¢109billion by September 2017 has become an important source of income for telecommunication companies.

The amounts bandied around represent a juicy opportunity for a revenue-hungry government to wade into the money-making mobile service.

Persons with knowledge of the best practices in the other parts of the world have all argued that the BoG is right over the stance it has taken.

Others have argued that many customers have mobile money wallets which are linked to their bank accounts, so if, Ministry of Communications and NCA want Kelni GVG to see the transactions, then it has to be done with the permission of the Bank of Ghana. 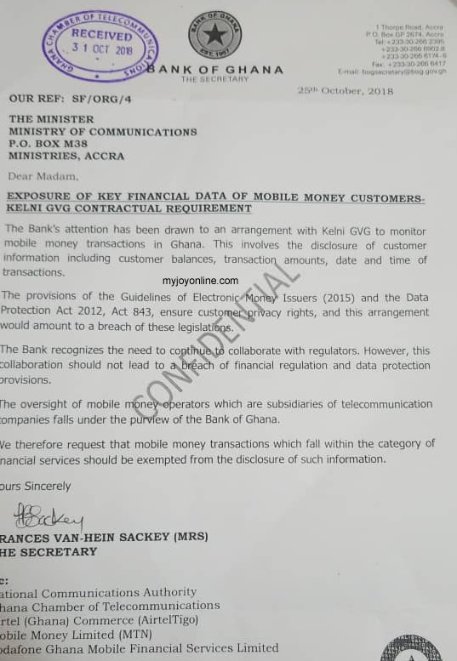