China has faced strong criticism recently for its treatment of members of the Muslim Uighur community.

According to the ruling Communist Party’s official newspaper, as of the end of September, 1.1 million local government workers have been deployed to ethnic minorities’ living rooms, dining areas and even Muslim prayer spaces.

The chilling intrusion at the hands of the government are taking place in China’s far west region of Xinjiang, home to the predominantly Muslim, Turkic-speaking Uighurs.

The community have long reported discrimination at the hands of the country’s majority Han Chinese.

While government notices about the ‘Pair Up and Become Family’ program portray it as an affectionate cultural exchange, Uighurs living in exile in Turkey said their loved ones saw the campaign as a chilling intrusion into the place they once felt safe. 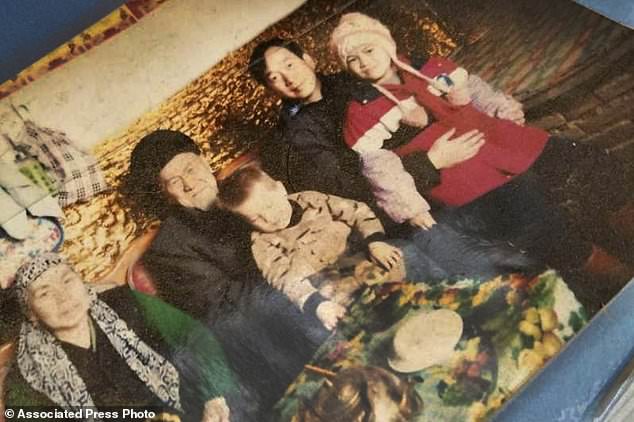 This photo provided by Ablikim Abliz, shows his uncle’s family posing with an unknown Han Chinese man (second from the right) in Istanbul, Turkey. Mr Abliz heard the Han Chinese man was part of a government homestay program meant to monitor his relatives 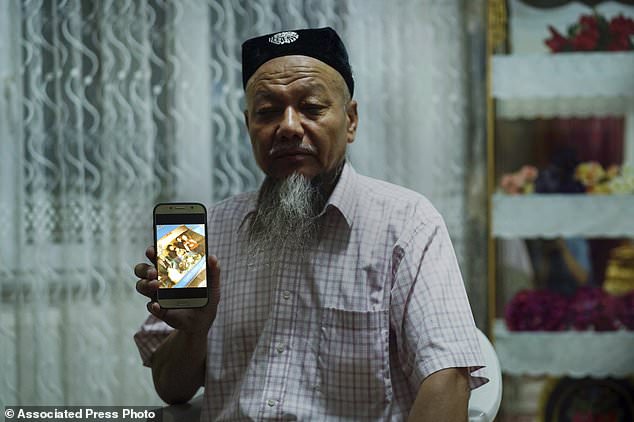 Ablikim Abliz holds up his phone displaying a photo of his uncle’s family with an unknown Han Chinese man in Istanbul, Turkey. He later heard that his uncle’s front door was boarded up and sealed with police tape, and has not been able to contact them since 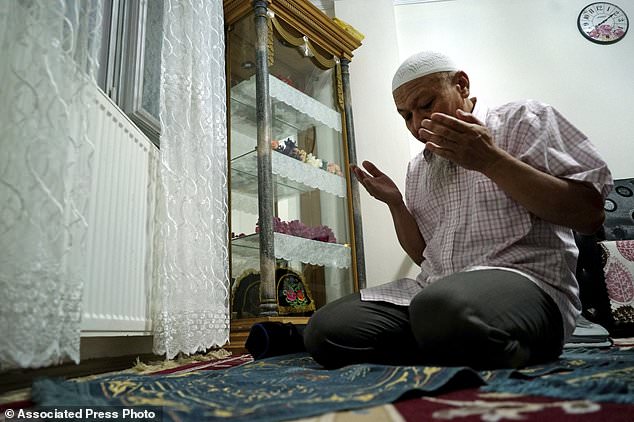 While government notices about the ‘Pair Up and Become Family’ program portray it as an affectionate cultural exchange, exiled Uighurs living in Turkey said their loved ones saw the campaign as a chilling intrusion into their private lives. Pictured: Mr Abliz praying at his home in Istanbul

They believe the program is aimed at coercing China’s 10 million Uighurs into living secular lives like the Han majority.

Anything diverging from the party’s prescribed lifestyle can be viewed by authorities as a sign of potential extremism – from suddenly giving up smoking or alcohol, to having an ‘abnormal’ beard or an overly religious name.

Now, Uighurs say, they must live under the watchful eye of the ruling Communist Party even inside their own homes.

‘The government is trying to destroy that last protected space in which Uighurs have been able to maintain their identity,’ said Joanne Smith Finley, an ethnographer at England’s Newcastle University.

In one photo provided by Ablikim Abliz of his uncle’s family, an unknown man is seen standing next to them.

Mr Abliz heard the Han Chinese man was part of a government homestay program meant to monitor his relatives and part of a broader crackdown on religious expression in China’s far western region of Xinjiang.

The Associated Press spoke to five Uighurs living in Istanbul who shared the experiences of their family members in Xinjiang who have had to host Han Chinese civil servants.

These accounts are based on prior communications with their family members, the majority of whom have since cut off contact because Uighurs can be punished for speaking to people abroad.

The Uighurs abroad said their loved ones were constantly on edge in their own homes, knowing that any misstep – a misplaced Quran, a carelessly spoken word – could lead to detention or worse.

In the presence of these faux relatives, their family members could not pray or wear religious garbs, and the cadres were privy to their every move. 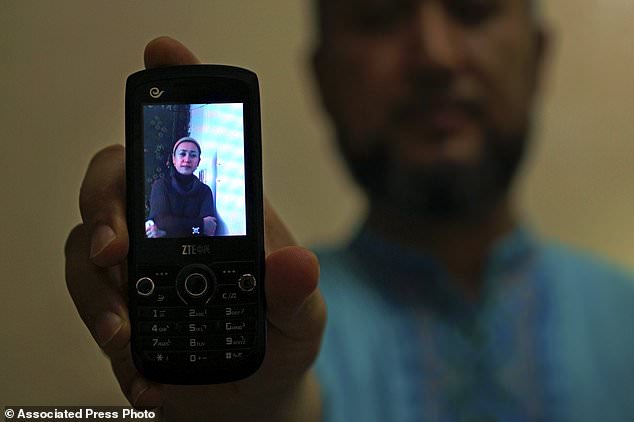 Halmurat Idris holds up a picture of his elder sister on his phone at his home in Istanbul, Turkey. Mr Idris says his sisters were monitored as part of a government homestay program

Tensions between Muslim minorities and Han Chinese have bubbled over in recent years, resulting in violent attacks.

The fierce government crackdown on broadly defined ‘extremism’ has placed as many as one million Muslims in internment camps, according to estimates by experts and a human rights group.

Uighurs say the omnipresent threat of being sent to one of these centers, which are described as political indoctrination camps by former detainees, looms large in their relatives’ minds when they are forced to welcome party members into their homes.

Government reports on the program gushed about the warm ‘family reunions,’ as public servants and Uighurs shared meals and even beds.

Another notice showed photos of visitors helping Uighur children with their homework and cooking meals for their ‘families.’ 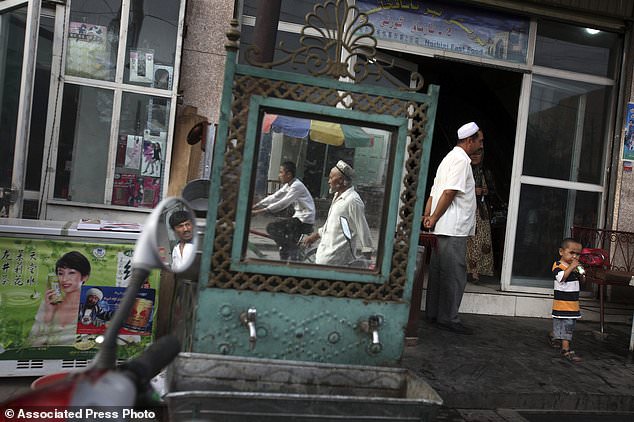 More than a million Chinese civil servants have been assigned to move into the homes of Uighurs and other ethnic minorities, spending weeks as uninvited guests. Pictured: Uighurs  seen outside a restaurant in Kashgar in China’s western Xinjiang province

The caption beneath a photo of three women lying in bed, clad in pajamas, said the cadre was ‘sleeping with her relatives in their cozy room.’

A different photo showed two women ‘studying the 19th Party Congress and walking together into the new era’ – a nod to when Xi’s name was enshrined in the party constitution alongside the likes of Deng Xiaoping and Mao Zedong.

Becoming Family Week turned out to be a test run for a standardized homestay program.

The Xinjiang United Front Work Department said in February that government workers should live with their assigned families every two months, for five days at a time.

The United Front, a Communist Party agency, indicates in the notice that the program is mandatory for cadres.

Cadres, who are generally civilians working in the public sector, are directed to attend important family events such as the naming of newborns, circumcisions, weddings and funerals of close relatives.

They must have a firm grasp of each family member’s ideological state, social activities, religion, income, their challenges and needs, as well as basic details on immediate relatives, the notice said.

A February piece on the Communist Party’s official news site said: ‘The vast majority of party cadres are not only living inside villagers’ homes, but also living inside the hearts of the masses.’

Overseas Uighurs said the ‘visits’ to their relatives’ homes often lasted longer than five days, and they were closely monitored the whole time. 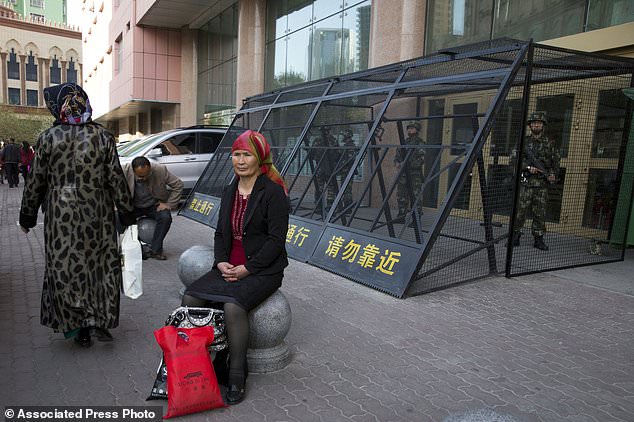 An Uighur woman rests near a cage protecting heavily armed Chinese paramilitary policemen on duty in Urumqi in China’s northwestern region of Xinjiang. Now, Uighurs say, they must live under the watchful eye of the ruling Communist Party even inside their own homes

The cadres would ask their family members where they were going and who they were meeting whenever they wanted to leave the house.

‘Praying or even having a Quran at home could endanger the whole family.’

Yunus, who now lives in Istanbul, said his father used to lament to him about being visited three to four times a week by the administrator of his neighborhood committee, a middle-aged Han Chinese man.

The surprise house calls began in 2016, and it was ‘impossible to say no,’ Yunus said.

Uighurs said they were particularly repulsed by the thought of male visitors living under the same roof as their female relatives and children – a practice contrary to their faith.

Women and kids are sometimes the only ones left at home after male family members are sent to internment camps.

In recent years, the government has even encouraged Uighurs and Han Chinese to tie the knot.

Starting in 2014, Han-Uighur spouses in one county were eligible to receive 10,000 yuan ($1,442) annually for up to five years following the registration of their marriage license.

Such marriages are highly publicised.

Thousands of miles away, in Turkey, Uighur relatives in exile watch what is happening with dread.

Earlier this year, Ablikim Abliz studied a photo of his uncle’s family gathered around a table.

Clad in thick winter jackets, his uncle and the smiling Han Chinese man beside him both held chubby-faced children in their laps.

His uncle had posted the photo to his WeChat page along with the caption ‘Han Chinese brother.’

The 58-year-old Abliz said his entire extended family in China has been sent to internment camps.

When he saw his uncle’s photo, his first reaction was relief.

If his uncle had been assigned a Han family member, Abliz thought, that meant he was safe.

But the consolation was short-lived. A friend who tried to visit his uncle in Turpan this summer told Abliz that his uncle’s front door was boarded up and sealed with police tape.

Abliz has not been able to reach any of his family members since.