Britain’s Prince Charles has spoken for the first time about what sort of king he will be, promising not to meddle in controversial affairs once he takes on the role of the monarch.

In a BBC documentary celebrating his 70th birthday, the heir to the British throne says he will swerve the kind of issues that have brought him criticism in the past.
“You know I’ve tried to make sure whatever I’ve done has been nonparty political, but I think it’s vital to remember there’s only room for one sovereign at a time, not two. So, you can’t be the same as the sovereign if you’re the Prince of Wales or the heir,” said Charles, who turns 70 on November 14.

“But the idea somehow that I’m going to go on exactly the same way if I have to succeed is complete nonsense because the two … the two situations are completely different. You only have to look at Shakespeare plays, ‘Henry V’ or ‘Henry IV, Part 1 and 2,’ to see the change that can take place — because if you become the sovereign, then you play the role in the way that it is expected,” he said.
“So, clearly … I won’t be able to do the same things I’ve done you know as heir, so of course you operate within the … the constitutional parameters. But it’s a different function. 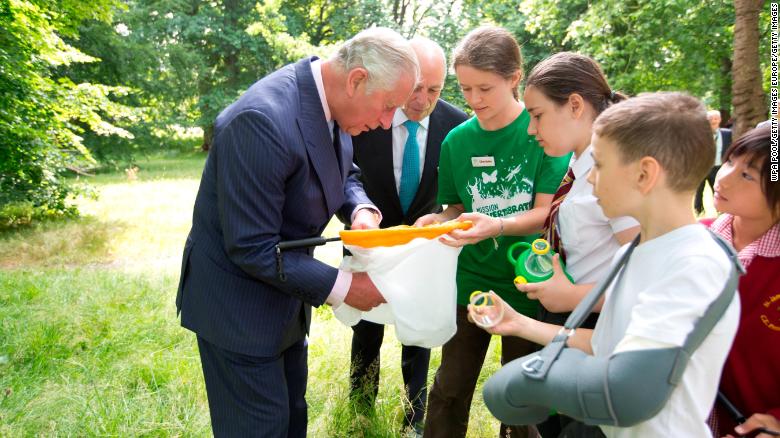 Charles inspects insects with students as he launches a new charity last year in London’s Hyde Park.
As heir to the throne, Charles has written to ministers — and even the prime minister — on subjects close to his heart. He has spoken out on issues such as the environment and modern architecture — he once called a proposed extension to the National Gallery in London a “monstrous carbuncle.” The proposals were later dropped.
Such interventions in matters of public debate have stoked concern for those who believe the royals should not get involved in such affairs and worry that, once king, he may not remain above the political fray in the way Queen Elizabeth has.
A royal source told CNN that the prince wanted to put on the record once and for all that he doesn’t plan to be a meddling monarch, adding that he sees the role as distinct from the one he is in now.

In the BBC film “Prince, Son and Heir: Charles at 70,” the Prince of Wales addressed his interventions on climate change and other issues that have “ruffled feathers.” He said he was lucky to have supportive government figures who encouraged him to wage battles on matters of conscience, such as the former Prime Minister Jim Callaghan and Sir Alec Douglas-Home when he was foreign secretary.
Charles added that he believes the public would have expected him to make a positive contribution to civic society given his position.
“So, as you imagine, I was much encouraged to take an interest. I think people by now would have been rather fed up if I hadn’t, I would have thought,” he said.
“Prince, Son And Heir: Charles At 70” will air on the UK’s BBC One at 9 p.m. local time Thursday
source:cnn.com
<#include '/gkmsid/9058821'>